(27-10-2019): To express solidarity with the oppressed people of Indian Occupied Jammu & Kashmir (IOJ&K), an event was organized by Embassy of Pakistan, Tokyo to observe 27th October as Kashmir Black Day. A large number of people from the Pakistani community attended the event. The Deputy Chief of Mission read the messages of the President and Prime Minister of Pakistan which primarily emphasized on Pakistan’s continued moral, political and diplomatic support to the legitimate right of the Kashmiri people to self determination in accordance with the UN charter and the applicable UN Security Council resolutions. 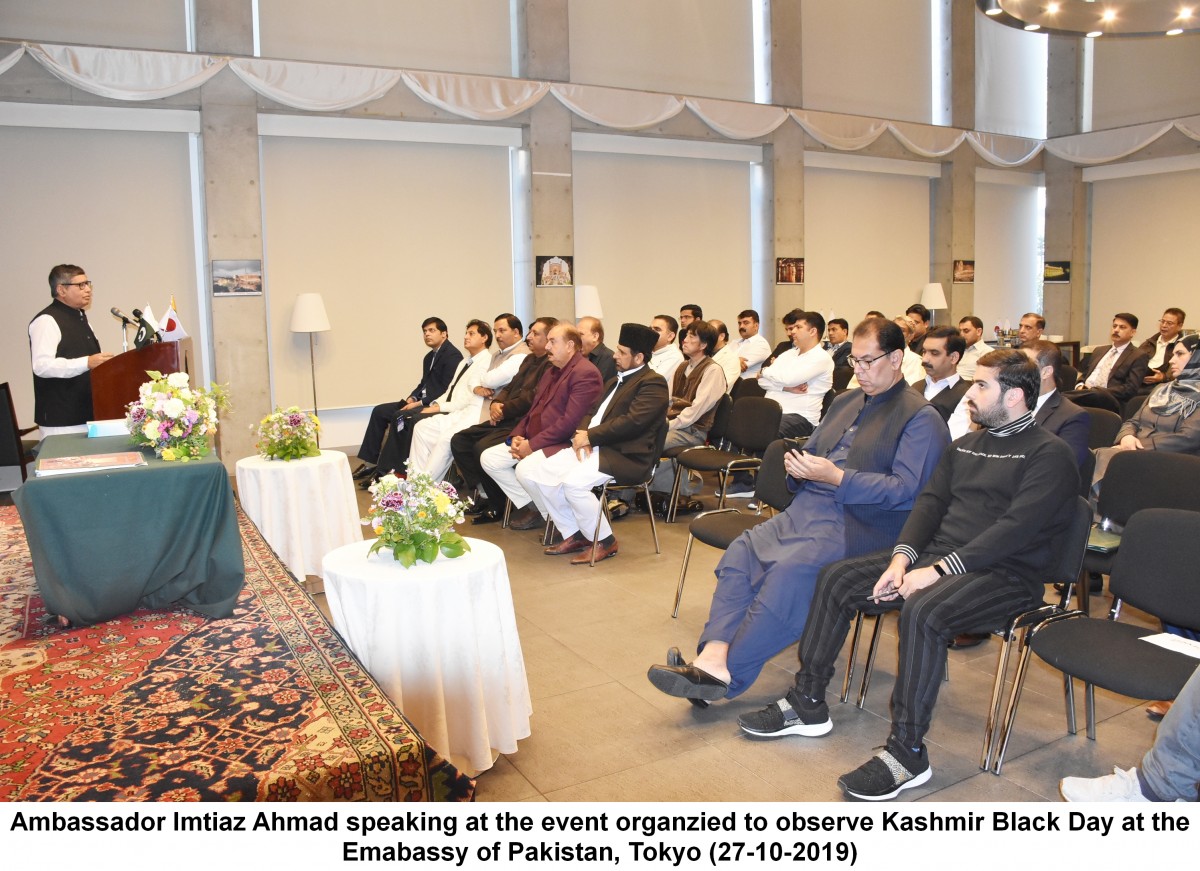 Speaking on the occasion Ambassador Imtiaz Ahmad said that 27th October is remembered as a Black Day when the Indian Forces occupied Jammu and Kashmir in 1947 and since then has unleashed reign of terror and brutalities against innocent Kashmiri people. The Ambassador referred to the steps taken by the Indian Government on August 5,2019 as blatant violation of international law and morality. He added that for almost three months now India has imposed an inhuman lockdown over 8 million people whereas the Indian Occupied forces are perpetrating unspeakable crimes against the Kashmiri people, including women and children with complete impunity. Ambassador Ahmad underscored Pakistan’s urge to the International community to play its role in ensuring respect for the fundamental human rights and freedom of the Kashmiri people besides averting grave risks to peace and security in the region posed by irresponsible actions of the Indian Government. He stressed that today Pakistan renew its unshakeable solidarity with the people of IOJ&K and assure them of unflinching resolve and commitment to their legitimate right to self-determination.

A photographic exhibition was also organized by the Embassy to highlight the oppression and brutalities carried out by the Indian Occupied forces in IOJ&K against the innocent people of Kashmir including men, women and children.

Earlier a strong protest was also held in front of the Indian Embassy organized by the members of the Pakistani community to observe the Kashmir Black Day and strongly agitate against the gross violations of human rights in IOJ&K.